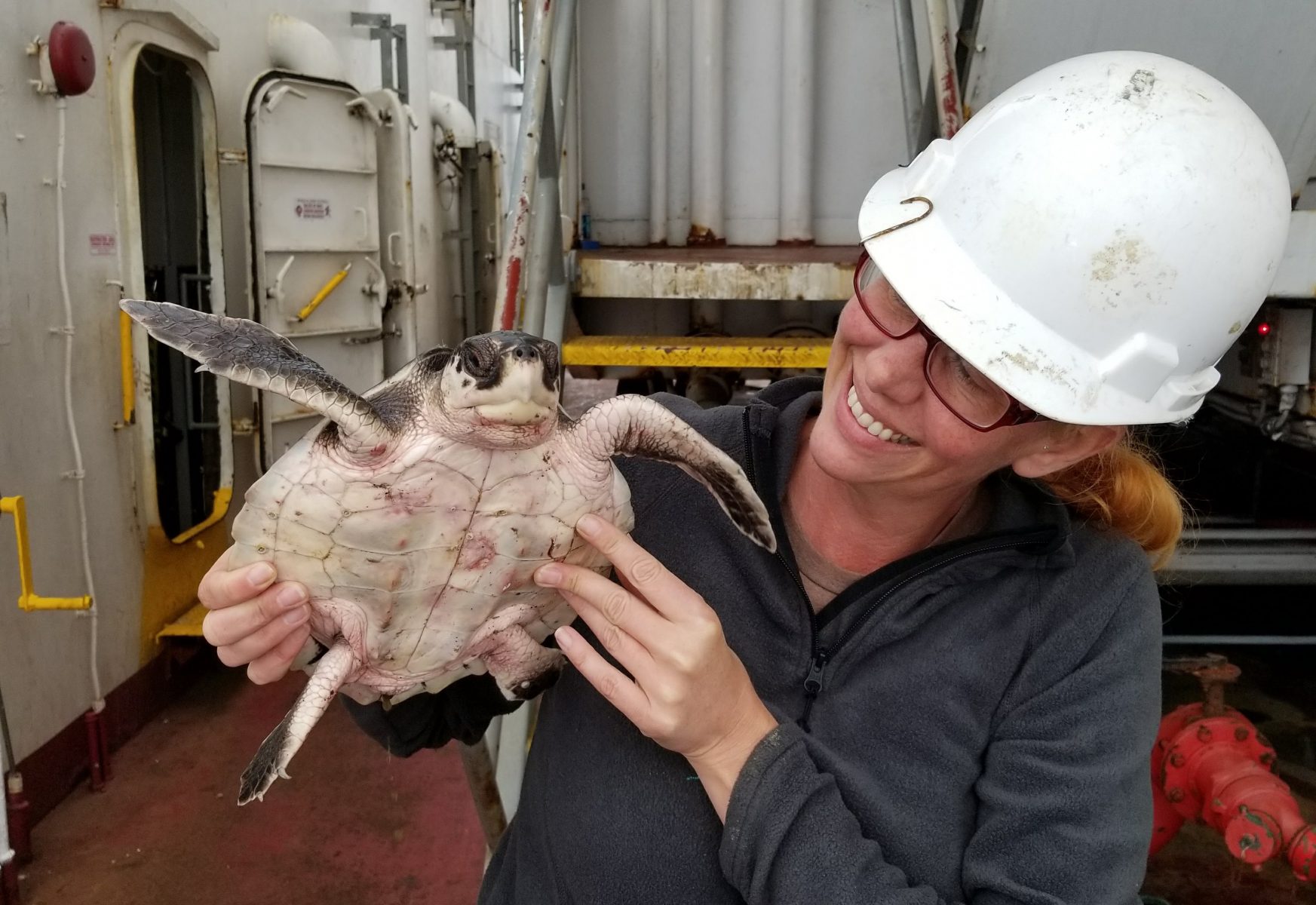 At Great Lakes we often discuss environmental protection. Oil spill preparedness, manatee avoidance, whale alerts and turtle exclusion devices (TEDs) all fall on the list. Our focus is always on prevention and avoidance first and foremost, as it is our goal to leave the smallest environmental footprint. Our large marine equipment, however, can unfortunately disrupt the natural environment at times. If interaction does occur, our crew is trained to respond accordingly. We work to produce the best possible outcome given the situation. In March of 2018 the Terrapin Island crew logged a very unique experience that’s worth telling – the tale of the turtle named Tonks.

It all began with the TSHD Terrapin Island dredging Contract 1 of the Post 45 Charleston Harbor Deepening Project. GLDD’s third party Endangered Species Observers (ESOs) from Coastwise Consulting were living on board the vessel for response/support in the event of an environmental incident. After the dredge filled the hopper and completed the load, ESO Candace Cox performed her routine inspections of the dragheads, inflow boxes and hopper bin to ensure no endangered species’ remains were entangled in the equipment. During observation she saw a small Kemp’s ridley sea turtle on the sandy material inside the hopper. Timing was fortunate in that the dredge inflow boxes were in the open position during dredging of the load due to excessive debris removal. The small turtle had made it through the pumps and into the hopper of the dredge.

Ms. Cox recalls, “Its carapace, or shell, appeared to be no larger than a dinner plate, about 10” in diameter and, to my surprise, it was still alive.”

Ms. Cox notified the bridge. Captain Steven Taylor suspended dredging operations immediately and mustered a few crew members on the catwalk next to the hopper where an impromptu safety meeting was held to determine the safest way to recover the turtle from the hopper. The deck hands donned the appropriate PPE and the turtle was brought on deck. Ms. Cox and her colleague, ESO Meg Hoyle, obtained morphological data and took photographs of the turtle. They confirmed it to be a juvenile Kemp’s ridley.

At the SC Aquarium Sea Turtle Care Center, the small Kemp’s ridley was met after business hours by Dr. Shane Boylan and STCC staff, who all quickly began the triage process. Her plastron, carapace, flippers, face and eyes all suffered injuries due to her journey through the dredge. The force of the sand and debris had caused several abrasions and contusions on her 4.8 lb body. She kept her eyes closed for most of the triage because of her injuries, and when she did open them the doctors noted blood in the iris or cornea, in her left eye. She was placed in a tub to rest overnight. The next day after further analysis she was diagnosed with decompression sickness (the bends) from being pulled through the dragarm so quickly from the seafloor. She was placed in a pressurized oxygen chamber to assist her body in getting rid of some of the gas pockets in her kidneys. Her body responded well after only a few hours in the chamber. She was given antibiotics and vitamins and set up in a comfortable tank to begin her recovery process. Dubbed ‘Tonks’ by hospital staff, the tiny turtle joined what could possibly be the aquatic wizarding world of J.K. Rowling, for her recovery adventure.

Reports over the following months revealed positive progress for Tonks in all aspects. By mid-April she was moved to the Zucker Family Sea Turtle Recovery center in the visitor section of the aquarium, where she became a fan favorite due to her adorably small size. She was moved to larger tanks to practice diving and monitor for any residual effects from the decompression sickness. In August Tonks was PIT tagged (microchipped) for future identification should she have another run in with our species. This was the final step in preparation for her release. After six months in rehabilitation, thousands of visitors, lots of love and a clean bill of health, Tonks was released back into the ocean at the Isle of Palms County Park on September 6, 2018.

Her successful return home can be attributed to the multitude of people that cared (and a little bit of good luck). The crew on the dredge, the captain of the CTV, the ESOs, SCDNR and Coastwise Consulting agents that coordinated her transport, the hospital doctors and staff, and the many people that cheered her on with love and good wishes for a speedy recovery.

Ms. Cox recalls, “This was my first experience as an Endangered Species Observer with a sea turtle that survived an encounter with a hopper dredge. I’m sure that’s true for many of the crew involved and everyone was enthusiastic about trying to save it. During my next hitch on the Terrapin Island, we found out that the turtle had sustained very serious injuries, including the bends, which would’ve likely been fatal if not treated quickly. We were thrilled that it survived! Everyone involved that day should be very proud of the efficient, safe and professional work that truly saved a sea turtle’s life, especially since the Kemp’s ridley is the most endangered of all the sea turtles.”