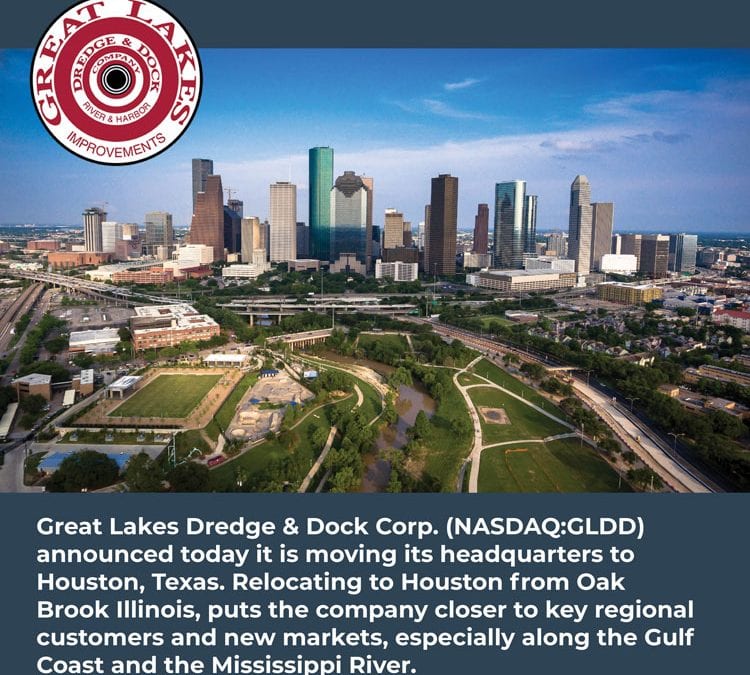 HOUSTON – [Oct. 22, 2020] – Great Lakes Dredge & Dock Co. (NASDAQ: GLDD) announced today it is moving its corporate headquarters to Houston, the latest milestone for what began in 1890 as a fledgling Chicago marine construction firm and has since grown into the country’s largest provider of dredging services.

The company – whose industrial might has helped create, shape and restore many of America’s biggest ports, harbors and shorelines – operates on every domestic coastline and throughout many inland U.S. waterways, with an expansive fleet of specialized dredging vessels. It also has performed extensive international operations, mostly in the Middle East.

Relocating its corporate offices to Houston from Oak Brook, Ill., puts the company closer to key regional customers and new markets, especially along the Gulf Coast and the Mississippi River. To further support the move, the company also recently opened strategic regional offices in Jacksonville, Fla., and Staten Island, N.Y., where it long has run major projects and expects to take on additional work.

The new headquarters and regional bases reflect the company’s customer-focused initiatives and growth potential, opening up more public and private business opportunities and strengthening its efforts to attract and retain a specialized workforce in Texas and other regions.

“The move to Houston is a testament to the region’s extraordinary diversity of talent and competitive landscape and supports our important connections and outreach in geographies that will better serve our customer base,” CEO Lasse Petterson said.

The Houston headquarters, scheduled to open in early 2021 with its executive leadership team, will be staffed gradually over the next 12 months. It is initially searching for 20,000 square feet of office space in the Energy Corridor, between the Galleria and Beltway 8. The company will maintain a business and operations support center in the Oak Brook area.

Gov. Greg Abbott welcomed the company to Texas, calling it a U.S. leader in the dredging and marine infrastructure industries.

“Houston offers a strong business climate and a talented workforce that will help the company grow and strengthen its ability to serve its customers. We thank Great Lakes Dredge & Dock Co. for bringing more jobs and economic prosperity to Houston and the entire state of Texas, and we look forward to this partnership,” Abbott said.

The relocation stems in part from changing industry dynamics as the dredging market has shifted from Northern Illinois and the Great Lakes to work along the Gulf Coast and in the northeast and southeast coastal regions.

“Having our main office in Texas and strategically opening new regional offices allows us to engage more effectively with our major customers like the U.S. Army Corps of Engineers, private energy clients, local communities and others, provide enhanced services and build a more efficient marketplace,” Petterson said.

The company is known for effective safety, environmental, social and governance processes in its operations. It is looking to expand its work to support liquefied natural gas export terminals, large vessel oil tanker ports and offshore wind developments along the Eastern Seaboard that require specialized vessels and techniques.

The move also will allow the company to leverage its long-term relationships with the Center for Dredging Studies at Texas A&M University, Louisiana State University and other universities that feature coastal resilience and natural infrastructure initiatives.

Since its founding, the company has been a leader in the building and maintenance of the nation’s navigation system, a safety champion that owns and operates the nation’s largest and most diverse dredging fleet. It is the only U.S. company with significant international dredging experience and has more than 1,000 employees globally.

The company has been involved in the development and construction of many well-known landmarks. In the Great Lakes’ region, that has included Chicago’s Navy Pier and Michigan Avenue Bridge; straightening and reversing the flow of the Chicago River; Northerly Island, a 91-acre peninsula along Chicago’s Lake Michigan; and the deepening the St. Lawrence Seaway between the U.S. and Canada.

Elsewhere, it has completed deepening projects in almost every port in the country and worked on important infrastructure projects, such as the massive container terminals in the ports of Los Angles and Long Beach and the Fort McHenry Tunnel that carries interstate traffic underneath the Baltimore Harbor.

In the Northeast, served by the Staten Island office, the company has been active since the early 1900s, maintaining an equipment yard there since 1910, completing major dredging in Boston and deepening the Port of New York and New Jersey. It also performed the majority of beach nourishment work along Long Island and the Jersey Shore after Superstorm Sandy.

The Jacksonville office will be serving a robust southeastern market, where the company has had key projects in every port and along the coastlines. That’s included reclaiming land that is now Port Miami, major deepening projects in Jacksonville, Savannah and Charleston and beach renourishment work from Florida to the outer banks of North Carolina.

Great Lakes Dredge & Dock Company, LLC (“Great Lakes” or the “Company”) is the largest provider of dredging services in the United States. In addition, the Company has a long history of performing significant international projects. The Company employs experienced civil, ocean and mechanical engineering staff in its estimating, production and project management functions. In its over 130-year history, the Company has never failed to complete a marine project. Great Lakes has a disciplined training program for engineers that ensures experienced-based performance as they advance through company operations. The Company’s Incident-and Injury-Free (IIF) safety management program is integrated into all aspects of the Company’s culture. The Company’s commitment to the IIF culture promotes a work environment where employee safety is paramount. Great Lakes also owns and operates the largest and most diverse fleet in the U.S. dredging industry, comprised of over 200 specialized vessels.

Although Great Lakes believes that its plans, intentions and expectations reflected in this press release are reasonable, actual events could differ materially. The forward-looking statements contained in this press release are made only as of the date hereof and Great Lakes does not have or undertake any obligation to update or revise any forward-looking statements whether as a result of new information, subsequent events or otherwise, unless otherwise required by law.