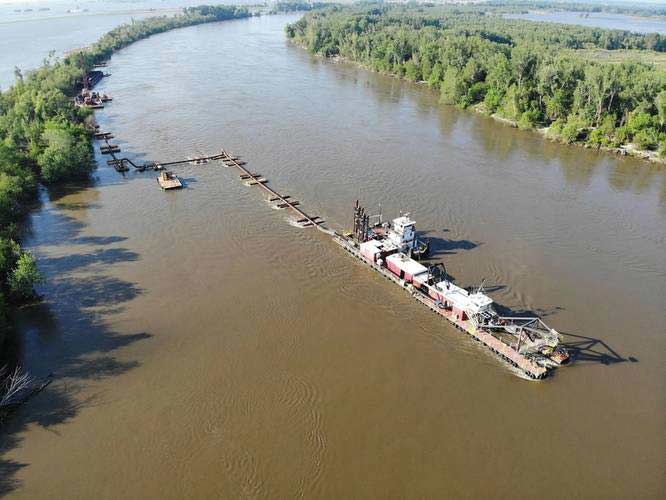 Closing the levee breach on the Missouri River near Percival, Iowa, June 20, 2019.

Great Lakes Dredge and Dock Company, LLC (GLDD) is working as a subcontractor with Western Contracting Corporation to provide fill for an emergency sand berm to close a levee breach at river mile 572 on the Missouri River.

GLDD’s Hydraulic Cutter Suction Dredge ‘Iowa’ is dredging approximately 350,000 cubic yards of river sands from a borrow source in the Missouri River and pumping along 7,000-ft of floating and shore pipeline to fill the 600-ft wide levee breach.   An initial 75-ft wide berm closure was completed on June 20th  and a second phase to widen the berm to 450-ft is underway.

According to the U.S. Army Corps of Engineers, Omaha District GLDD’s dredge cutter suction dredge Iowa completed an initial breach closure on a levee near Percival, Iowa yesterday.  The Corps said this closure stops the inflows through this breach.

“Our USACE and Contractor team fought through tough challenges such as high water and floating debris in the river to close this critical breach and provide some protection to those affected, said Brendan Kight, PE, USACE Area Engineer. “This is a great milestone for the L575 levee system as we continue to repair the system and restore protection.”

The L575 system alone had suffered 7 total breaches, out of the upwards of 50 occurring along the Missouri River in the Omaha District’s area of responsibility.

“The closure of this breach on L575 is the second of the four priority breaches to be closed and was the first of the four to be contracted due to its importance” said Bret Budd, PE, Chief of the Omaha Systems Restoration Team. “The third priority breach at L-601, north of Bartlett, Iowa, is anticipating closure within the next week and the final priority breach,

also on L-575 but located west of Hamburg, Iowa is currently scheduled for closure in late July. We are moving ahead with engineering and design to repair the remaining damaged levees that are active in the PL84-99 program that have eligible damages.”

This closure stops the inflows through this breach.  Contractors will be increasing the width of the closure from a nominal width of 50 feet to a width of 500 feet, said the Corps.  The Corps indicates that follow-on work, currently in source selection, will increase the height of the breach closure to provide additional flood risk reduction.

There are more than 500 miles of levees on the Missouri, Platte and Elkhorn rivers, and tributaries that have experienced significant flood damage since March 2019.  The Corps said due to the magnitude of damage along these levees, repair of the levee system efforts will take an extended period of time to execute.

Click to read the article on Maritime Logistics Professional